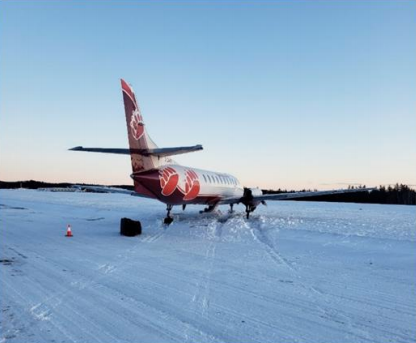 Before the engine start at CYHD, the FO provided a safety briefing to the passengers. The
crew then completed the “Engine Start” checklist, followed by the “After Start” checklist and
the “Before Taxi” checklist. While conducting the “Before Taxi” checklist, the FO initiated the
“Start Locks” task, which has 3 subtasks required to be completed by both the captain and
the FO. The captain instructed the FO to stand by, after which the FO then verbalized the
correct “Start Locks” subtask response. There was no response from the captain.
Approximately 7 seconds later, the captain began assessing runway conditions and then
engaged for a period of time with Sioux Lookout Radio about flight plan and departure
details. The captain then called for the “Before Takeoff” checklist, which was completed, and
began to taxi the aircraft to Runway 12 for takeoff. Directional control of the aircraft during
taxi was accomplished using the nose wheel steering and no differential thrust for turns
was required.

After completing the “Line Up” checklist, the captain transferred aircraft control to the FO.
At approximately 1610, take-off power was applied and, while the aircraft was accelerating
during the take-off roll, directional control was lost. The aircraft ran off the right side of the
runway approximately 150 m from the runway threshold lights. The aircraft struck a frozen
snowbank and came to a rest in an upright position, about 18 m off the side of the runway
and in about 46 cm of snow (Figure 1). The crew then shut down the engines following the
“Stopping Engines” checklist.

1. While the crew was carrying out the “Before Taxi” checklist, the “Start Locks” task was
initiated; however, it was interrupted and not completed.
2. After the captain told the first officer to stand by, the crew’s focus shifted to other tasks.
It is likely that this slip of attention resulted in the power levers not being pulled over
the flight idle gate to release the start locks.
3. The “Before Taxi” checklist did not contain a task to ensure that the start locks were
removed and, as a result, the crew began taxiing unaware that the propellers were still
on the locks.
4. After the engine was started or while the occurrence aircraft commenced taxiing for
departure, it is likely that slight or rapid transient movements of the engine power
levers, which were needed to taxi the aircraft, resulted in the release of the left propeller
start locks while the right propeller start locks remained engaged.
5. As the power was advanced through 20%, the “positive torque” call required by
standard operating procedures was not made, and the engine torque differential was
not noticed by the crew. As a result, power lever advancement continued although the
right engine torque/thrust remained near zero.
6. The engaged start locks on the right propeller prevented forward thrust, which resulted
in a significant thrust differential. This differential thrust during the take-off roll
resulted in a loss of directional control of the aircraft and, ultimately, a lateral runway
excursion.
7. Following the runway excursion, the propellers, which were operating at a high rpm,
shattered and splintered when they struck a frozen snowbank.
8. High-energy release of the nickel-cobalt erosion strips and splintered wood core debris
from the propeller blades penetrated the reinforcement panel, fuselage skin and cabin
wall, and resulted in serious injuries to a passenger sitting next to the penetrated cabin
wall.